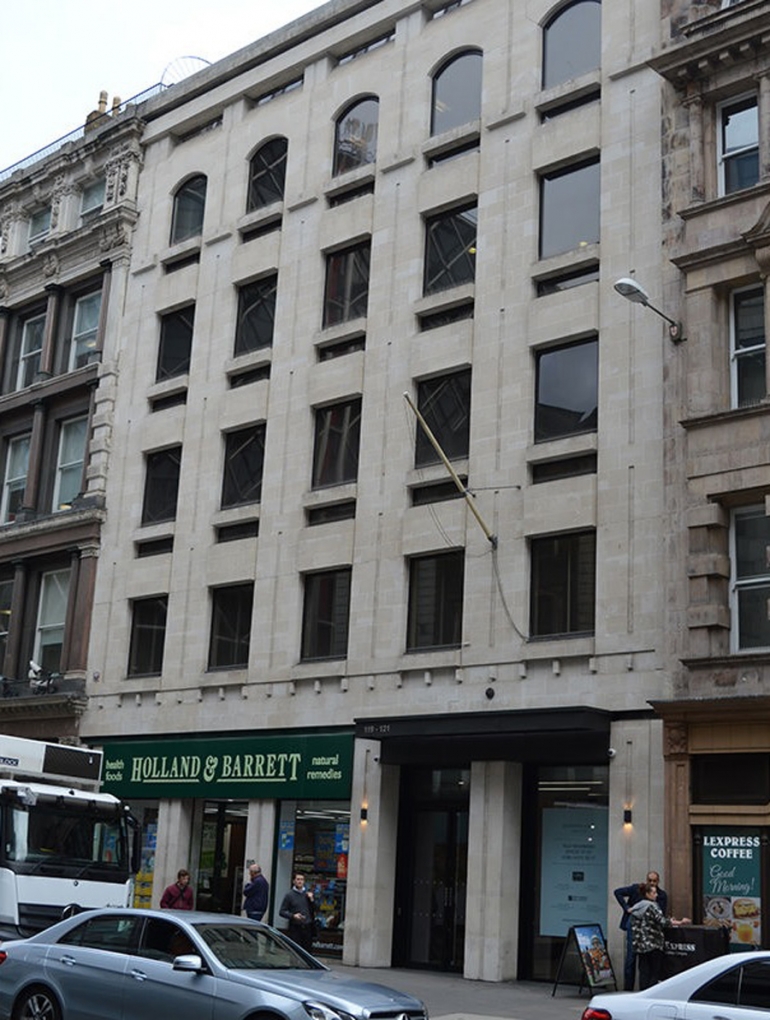 Sherborne House, 119-121 Cannon Street, EC4 is a multi-let property situated in the heart of London’s financial district Cannon Street, equidistant from Monument underground station and Cannon Street station. The surrounding area was initially the place of residence of the candle-makers, so Cannon Street first appeared as 'Candelwrichstrete' in 1183. The location has changed immensely over the years and is now well served by numerous bus routes and is within close proximity to many coffee shops, restaurants, bars and shopping destinations.

Clad in Portland stone, this historic office building has been the subject of a recent transformation. The frontage of Sherborne House benefits from the addition of a new entrance, canopy, and newly cleaned stonework. Internally, the fit out included new AHUs (air handling units) and enhancements were made to the landlord areas including lobbies, stairwells and toilets.

The design for the office space on the second floor was completely open plan and a key issue was the ingress of the outside noise emanating from the hustle and bustle of one of London’s busiest roads. It is often the case that offices such as Sherborne House are located near to transport links and in busy areas where outside noise levels are high, this can distract attention and make people less efficient at work. The suggested ambient noise level in a meeting room is 35-40dB and a cell office 40-50dB, however outside street noise levels can be 70-80dB.

Twenty1 Construction contacted Selectaglaze, to provide them with a solution to improve the acoustic insulation of the existing primary windows, which could not be replaced.

All the original openings were remodelled including the relining of the reveals and removal of the old heating system. On completion of the building works a survey was undertaken for 17 new secondary glazing units from the slimline range. Both series 10 horizontal sliding and series 20 vertical sliding units were used. Each was surveyed and manufactured for a specific opening to ensure a perfect fit to achieve the desired performance.

Overall the results look fantastic, in particular the featured sub-lights on the front elevation and the four full radius headed vertical sliders on the rear - the space now looks modern and fresh.

The newly refurbished second floor offices are now an ideal environment to house a new occupier, thanks to Selectaglaze soundproofing the space against the road traffic noise.

Established in 1966 and Royal Warrant Holder since 2004, Selectaglaze is the specialist in secondary glazing. It boasts a wealth of knowledge and a range of extensive products to suit all projects from Listed buildings, to new build hotels. Purpose made secondary glazing is often the only way to introduce contemporary working and living environments into Listed, historic or landmark buildings. Units arrive fully assembled to allow for rapid installation with minimal disruption and come with a 10 year fixture and fittings warranty.