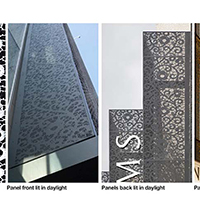 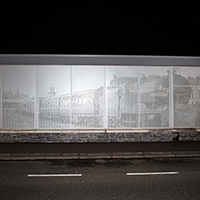 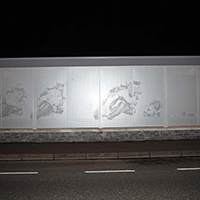 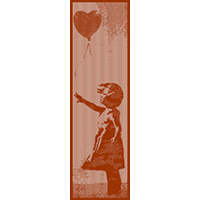 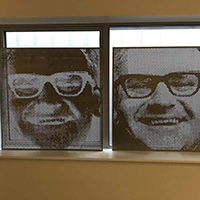 Perforated metals have been in existence almost since metals were first discovered when humans punctured the metal for decoration and even coinage. However, it was when the need for metal armour became prevalent so too did the need to make it lighter – so by applying tight perforations, the metal was made lighter, more breathable, but still durable. These perforations could be applied in uniform patterns or with distinctive designs as they were hand-punched, says Anthony Millington, Business Development Manager at Amron Architectural.

Jump forward a few hundred years to the industrial revolution and metals were being produced uniformly and flat, leading to the possibility of creating mechanised punching tools, and thus the emergence of the perforated patterns, commonly used in floorings and radiator grilles. In the early 2000s, these patterns gave way to the introduction of the perforated pixels.

In early 2000, pixelated perforated sheet was championed by such architects as Herzog & de Meuron specifically on the de Young Museum in San Francisco where they used a relatively rudimentary pixelated pattern to create an arboreal texture when the light shone through. Since then, the technology has improved to the point where we can now create high-resolution images, patterns and text.

To create a perforated image, we take a high-resolution JPEG and greyscale it; this allows the ‘image perforating’ programme to allocate a hole diameter to a shade of grey. We normally work with between four- and eight-hole diameters depending on the image and resolution. As a rule, the greater range of hole patterns used means we get improved resolution on the image; however, there is an impact in cost due to extended running times. However, when we are perforating large areas such as internal or external facades, very high resolution may not be necessarily due to the distance it is being viewed at.

We must also consider the lighting of the perforated panels, whether they are lit from behind the panel or in front has a huge impact on how the image relays. If we are lighting from the front, then the image must be programmed in the positive – this is especially good if the panels are mainly being seen in the daytime – the immediate image will be clear. If, however, the image is being backlit and perhaps viewed at night, then we must put the image into the negative for programming. This means that when viewed from the front with the lights off, the image may look slightly abstract; however, when the lights are put on, the image comes immediately into focus.

With the lighting comes the finish of the panel. If the image is positive, then it is generally a good idea to keep the finish light or bright so that the dark holes can contrast and pop. Similarly, for panels that are being lit, then you can get away with using dark or textured finishes as we used on the ‘Banksy’ panel where we used an Evolution powder coat to look and feel like rust.

The applications for these perforated image panels are varied, from pieces of art, to garden tabletops, or internal walls showing corporate imagery to large-scale external facades, and signage being an obvious one. The rise in popularity of the large-scale facades has been exponential over the last few years as the product lends itself so well to the application, by being both durable with excellent aesthetics, but also allowing light and airflow – this is especially true in the case of car parks. In recent months, with the spotlight on the office environment, these perforated panels are now being used as screens and dividers to designate areas and improve the working environment, again using the imagery to carry either a corporate image or ethos.

Where next for such a versatile product? I think people will become more adventurous with the images used with increased resolution, but also in areas where it hasn’t yet been used – such as ceilings where we are seeing more expanded meshes, it has great scope. After all, it is the fifth wall!