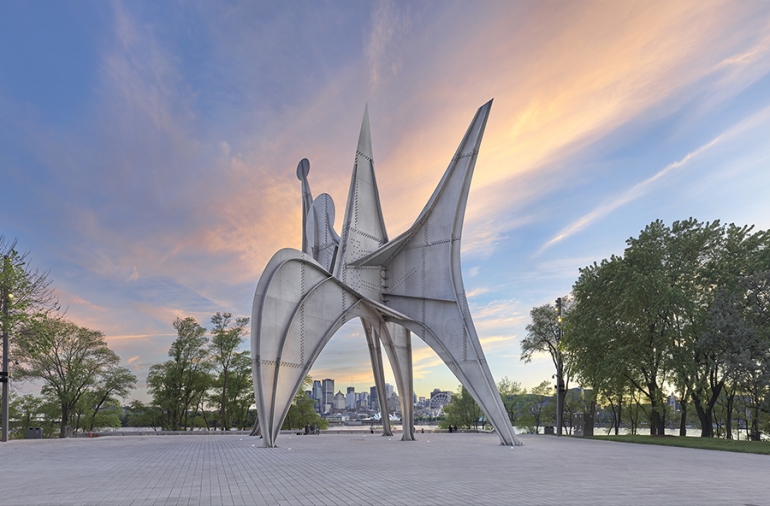 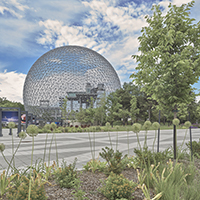 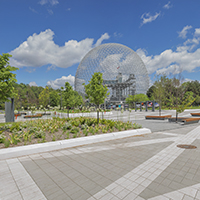 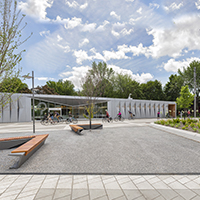 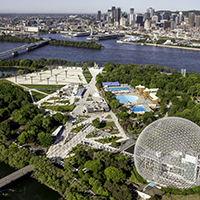 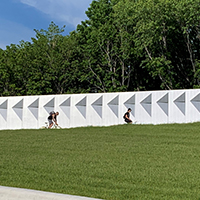 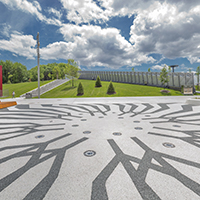 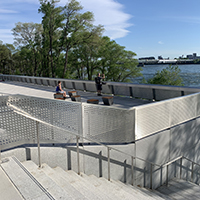 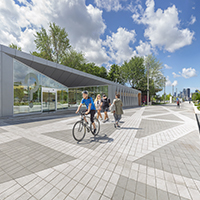 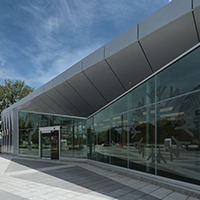 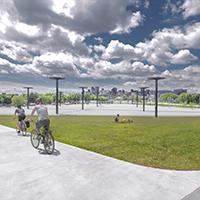 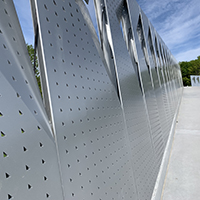 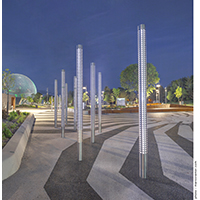 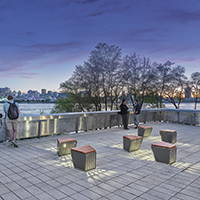 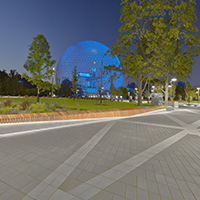 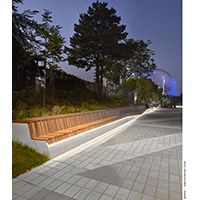 Over half a century after 50 million visitors first discovered the iconic destination, the original heart of EXPO 67 has had a total makeover as the new Espace 67 by multidisciplinary design firm Lemay. The firm has brought its unique brand of design to rethink, restore and reshape the mythical site on Île-Sainte-Hélène via a vast redevelopment project.

“Lemay’s concept blends the enchanting natural setting and rich historic past of this exceptional site, to offer a truly versatile space,” said Andrew King, Partner and Design Principal at Lemay. “It has been reborn as a destination unto itself, now able to fully accommodate a wide range of major events.”

With its record-breaking number of visitors, the 1967 International and Universal Exposition (EXPO 67), was the most successful World’s Fair of the 20th century. Held for six months in Montreal with 62 nations participating, the exposition afterwards remained as a standing collection of international pavilions known as ‘Man and His World’ on the two islands hosting it: Île-Sainte-Hélène, which had been greatly enlarged, and Île-Notre-Dame, which had been entirely created for the event. EXPO 67 is still fondly regarded as a social, cultural, political and technological landmark moment in Canadian history. The revitalisation of the site is a legacy of the City of Montreal’s 375th anniversary in 2017.

Recreating and building on the site’s original signature, Lemay successfully met the project objectives to recreate the spirit of EXPO. By integrating landscape and building architecture, urban design, brand image and signage, the firm created a new attraction in harmony with nature and culture, revealing the site’s genius loci, which is derived from its riverfront character, its stunning views of the city, its historical significance and its diverse vocations.

With its integrated design approach, Lemay developed a meaningful, adaptive reuse and holistic design strategy to create an original user experience via enhanced reception services, flexible event space and improved visitor orientation for this unique site connecting the island’s north and south shores. It sculpted the space into a geometric pattern defined by inclined planes and the iconic central pathway, which now maximises views of the Calder sculpture. The latter draws visitors from the metro into the site with its distinctive seating areas, greenspace and breathtaking views of downtown, Old Montreal and the St. Lawrence River.

In addition to improving visitor circulation, the redevelopment showcases the quality of the existing built and natural environment and makes architectural references to the site’s celebrated history, reviving the festive, unifying spirit of EXPO 67.

The service pavilions near the site’s entrance and metro station signal its vocation as a celebratory venue. Their envelopes’ shape and treatment, which integrate with the landscape interventions, echo the vocabulary of EXPO 67. The pavilion roofs follow the geometric pattern of the pavers in the central aisle, inspired by the triangular architecture of Buckminster Fuller’s geodesic dome, now known as the Biosphere. This triangular design is reproduced in the floor of the amphitheatre as well as in the perforations of the surrounding walls.

The pavilions’ volumes, materiality, facades and lighting make them key wayfinding elements that guide visitors through the site’s experience as they fulfil reception, information, restaurant and administrative functions. Their positioning also facilitates crowd management during events.

The amphitheatre covers a huge area but can be adjusted to accommodate events of different sizes while offering an inviting, interesting space when not in use. The triangular pattern of the paving stones recalls the predominantly geometric shape of the Terre des Hommes era, evident; for instance, in the structure of Buckminster Fuller’s geodesic dome, now known as the Biosphere.

Lemay’s thoughtful and strategic integration of nature, culture and site memory has created another unique urban destination, enhanced by a landscape signature highlighting the majestic river, spectacular urban and natural panoramas and the multifunctional vocation of a treasured site.